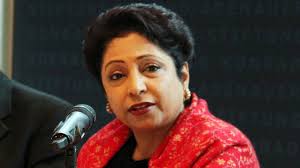 Today Rotary International District 3271 held the first ever International Conference on Peace, Conflict Prevention with sessions on international peace and conflict prevention, as well as in South Asia. The conference had academic, political and diplomatic heavy weights from Pakistan(Senators Mushahid Hussain, Javed Jabbar, Ambassador Dr. Maleeha Lodhi), India( Mr. Mani Shankar Mani Aiyyar) , Bangladesh(Mr. Farooq Sobhan) as well as United States(Ms. Lyn Cole) and the President of Rotary International( Ms. Holger Knaack), the Rotary Governor District 3271 Dr. Farhan Essa, Rotary Trustee Mr. Aziz Memon and the Chari of the Conference, Mr. Navaid Khan. This is a big honour for the Rotary District in the background of the 75th UN General Assembly. Over 160 participants joined from across the world, in particular Pakistan and India.

The session highlighted the importance of ongoing service and contribution by organizations such as Rotary International, as well as citizens of the region on an individual level, especially as the world deals with the COVID-19 pandemic, geo-politics, climate change and also lack of access to basic needs.
Panelists noted the challenges to peace including racism, islamophobia, cultural misunderstandings, propaganda, resurgence of right-wing politics among others, but were unanimous in emphasizing the need to engage in constructive dialogue and pursue engagement at all levels and address fundamental issues that affect peace, stability and justice in the region and beyond. Senators Mushahid Hussain and Javed Jabbar emphasized the need for editors, publishers, media to engage with eachother and enhance our understanding of eachother. When asked about Gulf countries recognizing Israel, and whether other countries would do so, Dr. Maleeha Lodhi indicated that this was not something the Government of Pakistan will do as there is no basis to such recognition, and is a betrayal of the people of Palestine.